If you back Alice's Nightmare in Wonderland on Kickstarter at the £10 WHITE RABBIT level pledge or above, you will receive an eBook of the Pax Britannia novella White Rabbit as part of your reward, courtesy of those thoroughly decent chaps at Abaddon Books - the home of Pax Britannia. 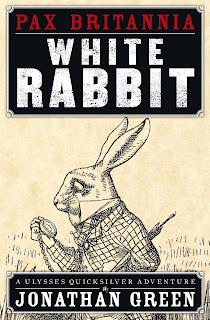 In White Rabbit, dandy, detective and adventurer Ulysses Quicksilver journeys into a world of madness and murder, meeting some sinisterly familiar characters along the way.

2 days to go until Alice's Nightmare in Wonderland goes live!

Alice's Nightmare in Wonderland is a brand new adventure gamebook with a dark Steampunk twist. To give you an idea of just what that means, here's the first draft of the introduction to the adventure... (click to enlarge)

“You’re late! Wake up!”
Alice woke with a start and sat up, blinking in surprise and looking about her in bewilderment. It was a balmy summer’s afternoon and she was sitting beside a river, the long grass that had formed her bed dotted with daisies. The waters gurgled softly as they passed by on their way downstream.
Something about the scene seemed very familiar.
“Don’t just sit there! Get up! You’re late!” came the shrill voice again.
The hot weather making her feel sleepy and dull-witted, Alice’s gaze followed the sound to its source. There, standing in the shade of a chestnut tree, was a white rabbit.
But this wasn’t just any white rabbit. This particular rabbit was dressed in the manner of an English gentleman – jacket, waistcoat and all. The rabbit’s ears were a little threadbare, the stuffing poking out through holes worn in the skin, and as it tilted its head to one side to observe her with its glassy pink eyes, Alice thought she heard a grating of gears.
Alice started to her feet, as it flashed through her mind that, once upon a time, she has seen something like this rabbit, wearing a waistcoat and carrying a pocket-watch, on some previous occasion. But there was no timepiece clutched in the rabbit’s paws this time.
“Who are you to say I’m late when you are not even carrying a pocket-watch?” Alice asked, not one to be outdone by an animal that looked like nothing more than a taxidermist’s test subject.
The rabbit said nothing, but simply unbuttoned its waistcoat, and Alice gasped as her former cockiness was consumed by gut-wrenching terror. Where the rabbit’s stomach should have been, a huge watch ticked – a clock large enough to fill the cavity from ribcage to pelvis – raw and ragged scrags of meat poking between the wire stitches that bound watch and rabbit together.
“How can I be late,” Alice asked the rabbit, “when I don’t even know what it is I’m late for?”
She was suddenly aware of the wind having picked up, as scuds of cloud raced each other across the sky, a sky which had changed from sapphire blue to a seething, bloody claret colour.
“You are needed in Wonderland,” the White Rabbit informed her, the twitching of its nose accompanied by a mechanical whirring sound.
“Wonderland?” There was something familiar about that name, Alice was sure of it, but she couldn’t quite put her finger on what it was.
“It’s the Queen of Hearts. The whole realm has suffered the ravages of her tyrannical reign, and if you thought things were bad before, they are considerably worse now. It’s a miracle I managed to escape her Tick-Tock Men.”
“Before?” Alice whispered in a daze. “Tick-Tock Men?”
“Yes, Tick-Tock Men! How else do you think I ended up like this?” the rabbit said, looking down at his stomach and the ticking timepiece embedded within what little flesh remained there.
Alice stared at the creature in dumfounded amazement before finally finding her voice again. “Why are you telling me this? What do you expect me to do about it?”
“Why?” gasped the rabbit, in incredulity. “We need you, Alice. Wonderland needs you.”
“But what do you need me to do?”
“We need you to kill the Queen, of course.”
“Kill the Queen?” Alice echoed. “But why me?”
The White Rabbit gave an exasperated sigh and took a deep breath, in an attempt to compose itself, before speaking again.


“Because it’s your nightmare!”


If that sounds like your sort of thing (and if you're a fan of my Ulysses Quicksilver Pax Britannia novels then, let's face it, it probably is) you should definitely check out the Kickstarter page and plan your pledge.

Posted by Jonathan Green at 5:00 pm No comments: