The World of Pax Britannia

In the closing years of the 20th century the British Empire's rule is still going strong. Queen Victoria has been on the throne for 160 years, kept alive by advanced steam technology. London is a fantastical sprawling metropolis where dirigibles roam the skies, robot bobbies enforce the law and dinosaurs are on display in London Zoo.

Welcome to Magna Britannia, a steam driven world full of fantastical creations and shady villains. Here dashing dandies and mustachioed villains battle for supremacy while below the city strange things stir in the flooded tunnels of the old London Underground. 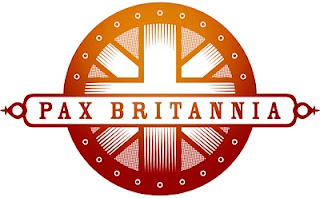 "Pax Britannia... a steampunk London where every shadow holds a knife and enemies of the Empire plot against the throne."

~ Graeme's Fantasy Book Review ~
"It's steampunk with scallywags, dinosaurs, dirigibles, neanderthals, automatons, femme fatales... and self-aware jokes."
~ The Penny Dreadful Review ~
"This is a lunatic world where the imagination runs wild - where steam-powered squid co-exist with face-changing super-villains - and the reader can delight in it all."
~ Pornokitsch ~