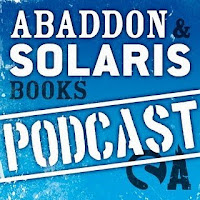 On Thursday I headed over to Oxford, specifically to the Abaddon Books dungeon, to record next month's (or maybe it was this month's) Abaddon/Solaris podcast. This time the focus is on the Pax Britannia line, so I found myself answering various questions about the genesis of the series and my thoughts about steampunk in general.
Al Ewing was also there, as the only other author to have contributed to the Pax Britannia line to date. Al, Jon Oliver (Abaddon's editor-in-chief) and I had a great time recording the interview (and adding a couple of Jackanory-style extract readings); I only hope there was enough usable material to create something that can be posted on iTunes. 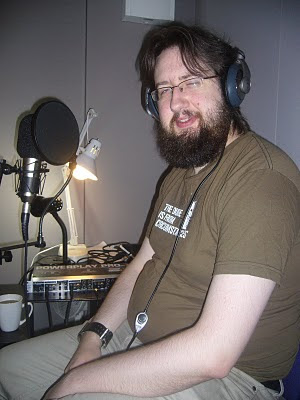 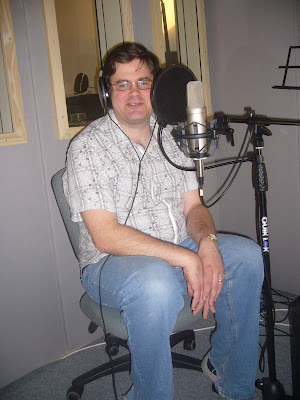 We certainly managed to fill the interrogation chamber with our 'Geek miasma' (as Jon O put it) and it was great to hear about Al's plans for El Sombra, Doc Thunder and the world of Pax Britannia.
Al and I and the whole of the Abaddon editorial team were then released - blinking, into the light - to take some sustenance and discuss the future of PB - which included mention of heat rays, Andy Warhol and howling commandos. It was great to catch up with Jon, Jenni and David and a discussion with Al (whilst giving him a lift to the station) about dinosaurs and King Arthur gave my creative gears the kick they needed for another future project. 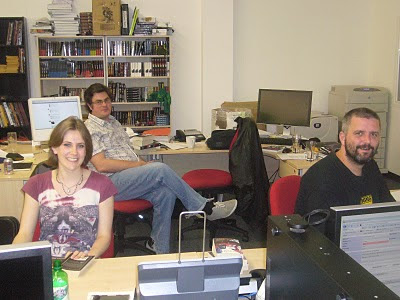 Where the magic happens... Jenni, Jon and David mastermind the Abaddon/Solaris takeover of the publishing world 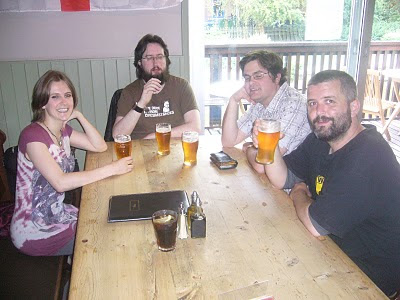 As you can see, much important thinking took place on Thursday

The latest Pax Britannia novel Blood Royal is out now, while Al's Gods of Manhattan is out in July. To get an idea of just how good this book is, you should read editor Jenni's blog-spurge here, on the Abaddon news page.
Posted by Jonathan Green at 7:30 pm No comments: 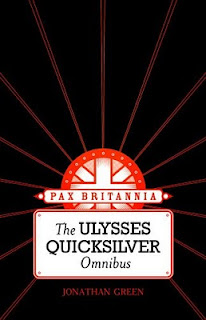 So, as regular readers of this blog will already be aware, this Christmas sees the publication of The Ulysses Quicksilver Omnibus.

I have been asked by my editor to provide an introduction to the book - so what do you want to know about Ulysses Quicksilver, the creation of the world of Pax Britannia, or the books themselves?

So, how deep is that exactly?

Jenni at Abaddon Books has recently been giving my first three Pax Britannia novels an overhaul in preparation for the release of the first Ulysses Quicksilver Omnibus later this year. Having read about UQ's exploits at the bottom of the Pacific Ocean on the edge of the Marianas Trench, she sent me this... 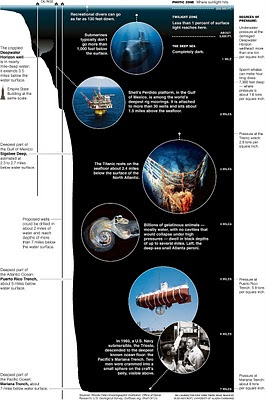 ... which just goes to show precisely how deep the deepest measured stretch of the ocean really is. I mean it's completely dark from less than a mile down! There could be anything lurking down there!
Posted by Jonathan Green at 8:16 pm No comments:

If Pax Britannia did Big Brother...

Labels: All the Fun of the Fair, Big Brother, Pax Britannia, Steampunk 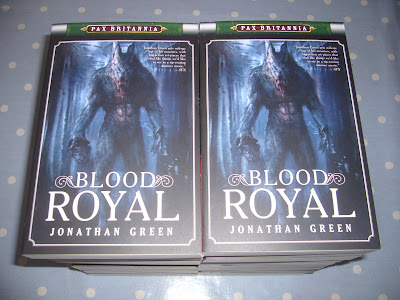 Blood will out!
Magna Britannia reels from the events that saw some of its citizens mutated into hideous insect hybrids. The streets are awash with rumours of a twisted new religion created from the destruction surrounding St Paul's Cathedral. In Europe, the spectre of war rears its ugly head, a war fought by unnatural beings. In the centre of the chaos, hero of the Empire, Ulysses Quicksilver, must maintain his calm, while madness reigns and he fights to protect civilisation itself. From the insect-haunted streets of a shattered London, to the cold snowy wastes of Russia, Ulysses finds himself on an adventure into the heart of a dark and bloody empire.
Get your copy here!
Posted by Jonathan Green at 9:51 am No comments: 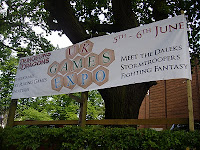 I had a very enjoyable weekend up in Birmingham at the 2010 UK Games Expo. This was my first visit, and I was taken aback by the size and accomplishment of the event. As well as the expected traders, demo games and tournaments, there were no less than three Daleks, three different Doctors, stormtroopers and Darth Vadar, as well as Steve Jackson and Ian Livingstone! 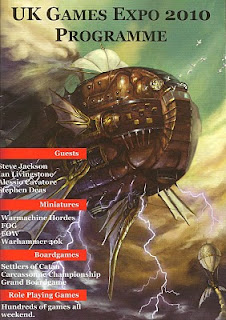 In fact, Fighting Fantasy had a notable presence at the event. Not only was there an FF stand, hosted by Wizard Books, and the aforementioned Jackson and Livingstone, there were also fans, old and new, by the score, and me. And best of all, the cover of the programme was Emerson Tung's glorious painting of the Eye of the Storm from Stormslayer! That gave me a real buzz, I can tell you.
One of the highlights of the weekend was the talk on Saturday give by Steve and Ian about the history of Games Workshop and Fighting Fantasy. It was very amusing and not only because of all the photos from the 70s. I even got an honourable mention and a round of applause - which was nice. 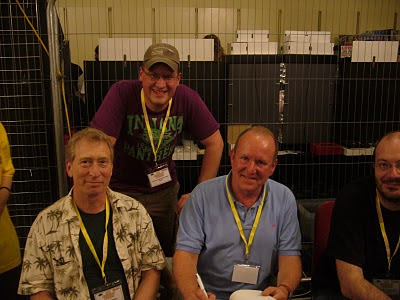 Steve Jackson, Ian Livingstone and their stalker (at least that's how it appeared in some of the other photos). 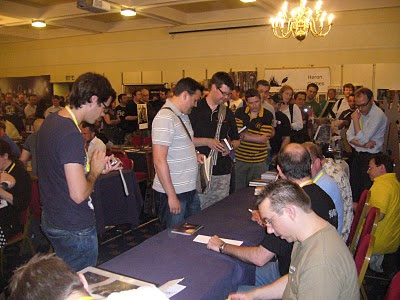 The crowds waiting to meet Steve and Ian (the queue went out the door!) whilst Gav Thorpe and Alessio Cavatore sign too. 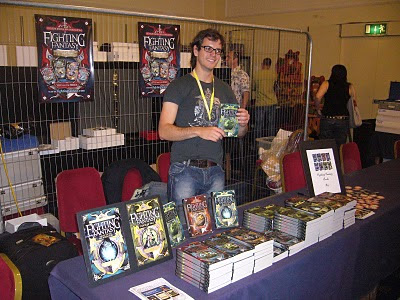 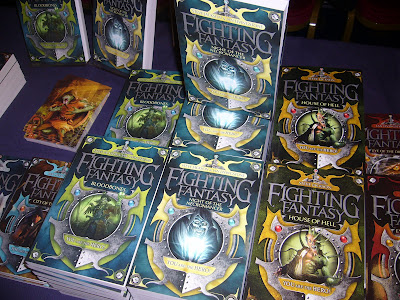 His wares - the brand-spanking-new FF gamebooks!

I also caught up with Ralph Horsley (who I collaborated with a couple of times back in the day), chatted jungle maintenance and work avoidance tactics with Gav Thorpe, and met Alessio Cavatore who was there promoting his new board game Shuuro (which I heard a punter describe as 'Chesshammer'). 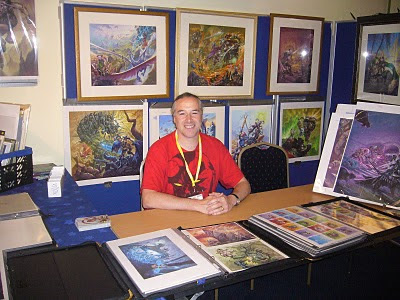 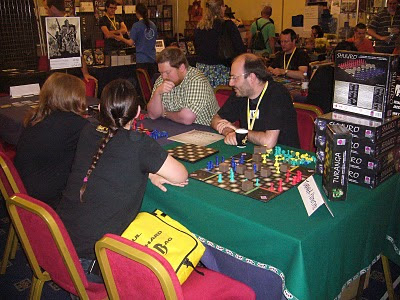 So all that remains now is for me to thank all those who organised the weekend (Tony and his team), everyone who dropped by and said "Hi!" and let me deface their new books, and Nick Sidwell, the FF editor, who manned the stand all weekend, doing sterling work, and who scored me a pass for the event.
Posted by Jonathan Green at 12:54 pm No comments:

It's here, at long last! And here's the fantastic ad from the back of the current issue of 2000AD to prove it. 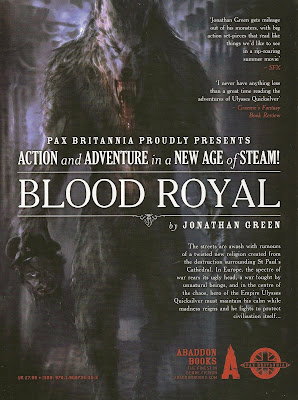 You can get hold of your copy of Pax Britannia: Blood Royal right here. So, what are you waiting for?
Posted by Jonathan Green at 10:00 am 1 comment: