New from LEGO - the Steampunk Series

As a self-confessed fan of all things LEGO (especially the Xbox games) and steampunk, I think this is just superb! 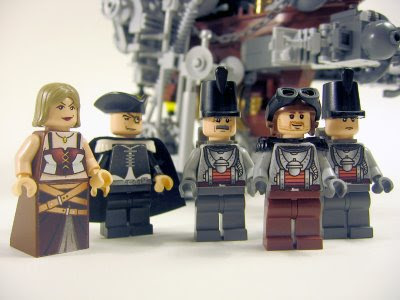 All I need to know now is when the rest of the Pax Britannia sets are going to be released. ;-)
Posted by Jonathan Green at 9:11 am 1 comment:

Now, I for one loved this year's blockbuster Iron Man movie. It was everything I had hoped for... That is, until I saw this. 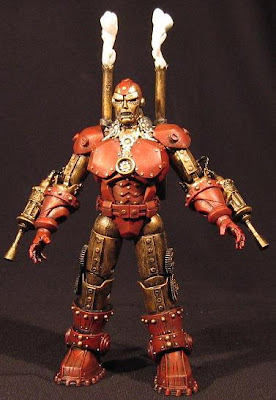 Now this is the Iron Man that I want to see made into a steampunk genre sci-fi actioner!
Posted by Jonathan Green at 2:39 pm No comments:

Abaddon editor and all round top bloke Jonathan Oliver has posted a comprehensive missive about the part he played in the recent Fantasycon and Abaddon's plans for the Twilight of Kerberos series.

So, if you want to find out what red wine, red faces, Operation Motherland and a quartet of trilogies have in common, then click here.
Posted by Jonathan Green at 8:37 pm No comments:

What is Myrrh Anyway? Out this week! 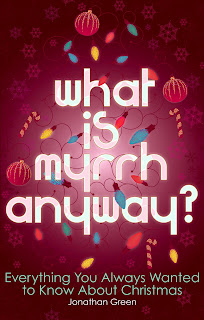 Hark, I am the bearer of glad tidings, to you and all your kin. For lo, What is Myrrh Anyway? is out this week!

So that's all your Christmas shopping needs sorted, in one easy to read, easy to wrap book, that's the ideal size to fit inside your Christmas stocking!
What is Myrrh Anyway? hits the shops this Thursday, but you can already order it online at Amazon.
Ho, ho, ho.
Posted by Jonathan Green at 5:49 pm No comments:

I've been dropping hints for a while now (some more subtle than others) but, as of today, I can exclusively reveal that the fifth book in Abaddon's Pax Britannia line is to be Evolution Expects, the fourth Ulysses Quicksilver adventure and the concluding novel of the first UQ story arc.

There's no front cover image yet, but here's the blurb I've written for the back cover of the book.

After more than 150 years as the supreme power on the planet, the British Empire has become a corpulent, stagnating monster. At its heart lies Londinium Maximum, a city festering under a near-permanent cloud of noxious smog. More than ever before, the realm of Magna Britannia needs a saviour – a man like new Prime Minister, Devlin Valentine.

But while London prepares for the launch of the Jupiter Station – the seeming answer to everyone’s prayers – there are those who want this longed-for change to come about more quickly; people who are even prepared to give evolution a helping hand.

None of this, however, is Ulysses Quicksilver’s concern. Back in London, after the horrific events that befell him in Yorkshire, the dandy adventurer has more pressing matters of his own to attend to. But when a deadly legacy returns, Ulysses finds himself drawn into that pit of madness and despair known as Bedlam.

A storm is brewing over London and this time – with a dangerous, masked vigilante stalking the streets, a monster from Jewish myth on the loose in the East End, and rival gangs fighting for control of the city’s underworld – when that storm breaks there may be nothing even Ulysses Quicksilver can do to prevent a catastrophic metamorphosis.

Don't worry - this may be the final story of the first story arc, but it's not the end of Pax Britannia, not by a long way!

Evolution Expects will be published by Abaddon Books in May 2009.
Posted by Jonathan Green at 8:52 pm No comments:

Steampunk is making a comeback - apparently

Sound familiar? Well, how about this?
'Welcome to the bizarre and dangerous world of Victorian London, a city teetering on the edge of revolution. Its people are ushering in a new era of technology, dazzled each day by new inventions. Airships soar in the skies over the city, whilst ground trains rumble through the streets and clockwork automatons are programmed to carry out menial tasks in the offices of lawyers, policemen and journalists. But beneath this shiny veneer of progress lurks a sinister side. For this is also a world where lycanthropy is a rampant disease that plagues the dirty whorehouses of Whitechapel, where poltergeist infestations create havoc in old country seats, where cadavers can rise from the dead and where nobody ever goes near the Natural History Museum.' 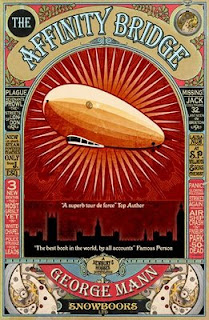 No, it's not the latest Ulysses Quicksilver Pax Britannia adventure - it is, in fact, an entirely different steampunk extravaganza entitled The Affinity Bridge from author George Mann.

According to one reviewer, 'Steampunk is making a comeback, and with this novel Mann is leading the charge.'
Well, as someone who has been leading the charge since February 2007 (having first envisaged the world of Pax Britannia nearly three years ago, back in October 2005) I for one can't wait to read it!
Posted by Jonathan Green at 3:20 pm No comments:

What is Myrrh Anyway?

Much excitement in the Green househould this morning, as my author copies of What is Myrrh Anyway? have arrived. And for what started out as a relatively short stocking filler of a book, it's actually turned out to be quite a weighty little book on the subject of Christmas and its traditions. 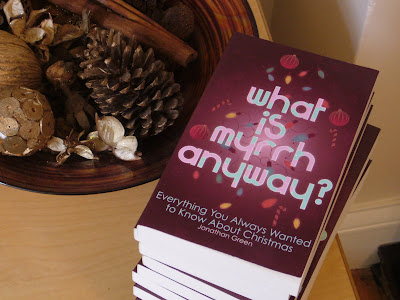 So if you've always wondered why Christmas Day falls on 25 December (and not the 15 Augcember, for anyone who's seen the new series of Harry and Paul on BBC1), or can't understand why Brussels sprouts are always on the menu for Christmas dinner, then this little Christmas cracker of a book is the one for you.

The book isn't officially published by Icon Books until 2 October, but it is available to pre-order over on Amazon. And you can discover more fun and fascinating facts about the festive season over on the dedicated What is Myrrh Anyway? blog.
Ho, ho, ho.
Posted by Jonathan Green at 10:01 am No comments:

There seems to have been something of a revival of the steampunk genre over the last few years, driven, it seems, not so much by literary endeavours as other media altogether, from computer games (think Bioshock) and comic books (Alan Moore's The League of Extraordinary Gentlemen and Stickleback in 2000AD), to film (Hellboy II has some fantastic steampunk elements to it, specifically the Golden Army itself). 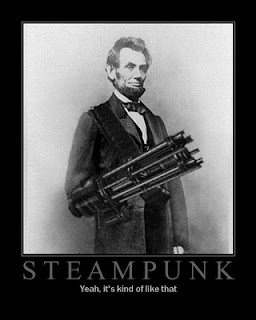 This has provoked some discussion in certain literary circles as to whether, bizarrely, steampunk has had its day. Now looking at the list of releases from the last two years or so I would have to argue that the genre has never been more popular! In children's fiction you have Stewart & Riddell's Barnaby Grimes: The Curse of the Nightwolf and Catherine Webb's Adventures of Horatio Lyle, and of course Philip Pullman's Dark Materials trilogy, while in adult fiction there have been a number of reinventions of the Victorian world giving the Age of Steam an extra technological dimension, or fantasy creations that owe just as much to that period of British History.
There have been Stephen Hunt's The Court of the Air and The Kingdom Beneath the Waves, the books of China Mieville, and of course a whole new steampunk world as revealed through the books of Abaddon's Pax Britannia series. And now we have two forthcoming anthologies of steampunk short fiction, one from Tachyon edited by Jeff and Ann Vandermeer, and Extraordinary Engines to be published by Solaris this October.
So, to my mind, the steampunk genre has never been healthier.
And if you're desperate to find out what happens to Ulysses Quicksilver and his faithful manservant next, Human Nature is out this December from Abaddon, while next spring the fifth Pax Britannia novel will be published, entitled Evolution Expects. I know that I, for one, can't wait!
Posted by Jonathan Green at 8:41 am No comments: