According to Tor.com, my Ulysses Quicksilver Pax Britannia novels are: "a steampunk Scooby Doo with a Queen’s Agent instead of German shepherd, a cool-headed butler instead of Shaggy, and a kick-ass Rolls Royce called the Silver Phantom instead of the Mystery Mobile."

I quite like the analogy actually, apart from the fact that Scooby Doo is a Great Dane rather than an Alsatian. 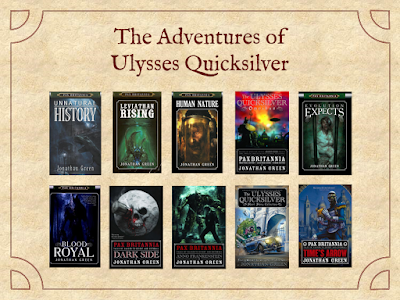 Posted by Jonathan Green at 9:57 am No comments:

If you fancy your novella or novel joining the same stable that publishes the Pax Britannia series, follow this link to the Abaddon Books' website where you will find everything you need to know about submitting to and writing for Abaddon Books.
Posted by Jonathan Green at 12:00 pm No comments: