Thanks to David Drage for this one... 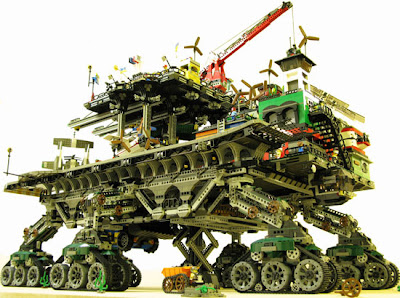 You can find out more about Crawler Town (which is rather like one of the Traction Cities from Mortal Engines realised in Lego) here. 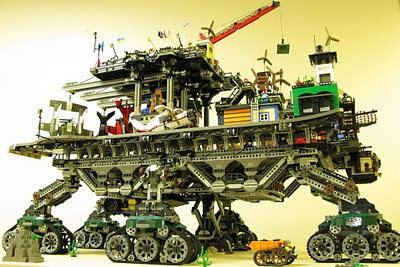 Now, how to incorporate this into the world of Pax Britannia... Perhaps it's time to drop the bomb!
Posted by Jonathan Green at 9:55 pm 1 comment:

Evolution Expects gets an electronic makeover

News from the Abaddon camp... Their Pax Britannian eBooks have undergone something of a makeover. Here's Abaddon desk editor David Moore to explain...

Those of you who read the hardcopy books - and you really should - will know that the Pax Britannia titles normally have lovely borders, twiddly Victoriana stuff around the chapter heads, mock-newspaper adverts for hair tonic and the like. Stuff which is normally hard to convey through the slightly limited mark-up tools of eBook designers.

But &E7 has been hard at work, exploiting new developments, tweaking the paramaters of the software, and... now Evolution Expects is out with all those bits kept in. Yes, Virginia, you can enjoy both the convenience of electronic reading and the beauty of our fine gentlemen's adventure chapbooks...

Posted by Jonathan Green at 10:37 am No comments:

JG spotted at the SFX Weekender

I get a mention over at Abaddon's eleventh and final post about the SFX Weekender and there's a photo too (heaven forbid!).

Just for the record:
1) They're my Ulysses L. Quicksilver books.
2) I have two little ones at home, so I was lucky to wangle a Saturday away at all!
3) No, I'm not going bald - I've just got short hair that tends to stick up revealing much scalp beneath.
Posted by Jonathan Green at 8:41 am No comments:

So, I drove down to Camber Sands yesterday for the second half of the SFX Weekender (I mean why else would you go to Camber Sands?) and had a great time.

I hooked up with David Moore and Jonathan Oliver of Abaddon/Solaris Books and signed some stock, as well as giving away some Pax Britannia badges, and was interviewed for a forthcoming podcast. I met ace Slaine artist and Preacher cover artist Glenn Fabry (who happens to think he's quite good). I was welcomed by Darth Vader and his Stormtroopers and ran into these interesting-looking fellows... 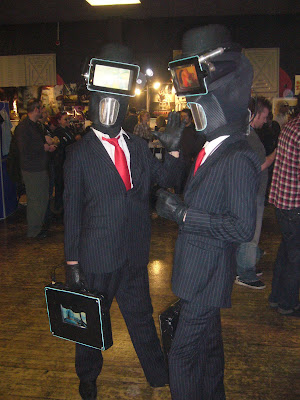 I listened to China Mieville talk about writing for the YA market (or not as the case may be), I listened to Jon Oliver read from his first novel The Call of Kerberos, I watched the fantastic Moon (starring the even more fantastic Sam Rockwell), I listened to a Q&A session with Toby Whithouse, creator of Being Human, having just watched a sneak preview of tonight's episode, and listened to a panel discuss the various merits, or otherwise, of tie-in and spin-off fiction (or tie-off, as one of the panellists called it). 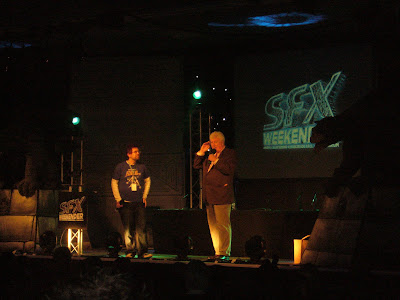 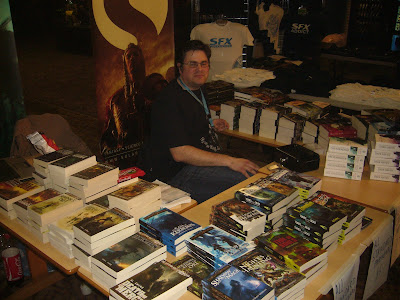 Jon Oliver - lord of all he surveys 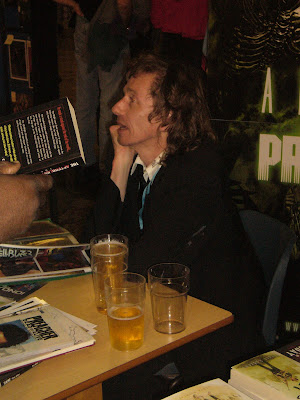 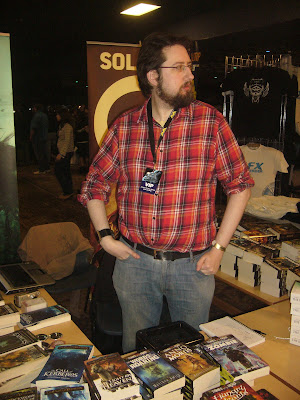 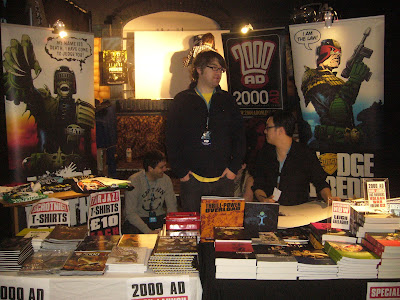 The 2000AD stand - Clint Langley and Leigh Gallagher draw for your entertainment
To conclude, here's a list of ten things that I now know as a result of the SFX Weekender that I didn't know 48 hours ago:

1) You can buy a bespoke Dalek for £3,000 but it'll take at least 10 weeks to make.
2) Glenn Fabry's thinking of becoming a teacher.
3) The novelisation of Snakes on a Plane was Black Flame's best-selling title.
4) Tom Baker gets chatted up in Waitrose by ladies of a certain age (that means they're in their 70s, I think).
5) Ianto Jones actor Gareth David-Lloyd was unaware of the Scottish Falsetto Sock Puppet Theatre's version of Torchwood, which they call Torchwool.
6) Cosplay is really just what my 3 year-old calls dressing up (but done by adults).
7) Gareth David-Lloyd would like to play Lion-O in a live-action version of Thundercats.
8) He-Man is camp.
9) Leigh Gallagher can't draw as quickly as Clint Langley.
10) This Christmas will see the release of the first Pax Britannia Ulysses Quicksilver omnibus.
Posted by Jonathan Green at 4:27 pm No comments:

Pax Britannia the Movie - have you seen it yet?

Have you seen the movie-style trailer for the Pax Britannia series yet? Here's what one fan had to say...

What a great video. Its hard to keep the viewer's attention for 4.5 minutes using stills and text, but this one pulled it off. Thanks for posting!
You can check it out for yourself on YouTube, or at the bottom of this post, as it happens...

The Father of Steampunk signs with Angry Robot

Yes, you read that right... K W Jeter, the Father of Steampunk has signed to Angry Robot Books. To read more about this exciting piece of news, click here.
Posted by Jonathan Green at 7:30 pm 1 comment:

Some more funky retro futuristic steampunk wallpapers for you...
Posted by Jonathan Green at 7:28 pm No comments:

Steampunk - takes you back to the future

'Speculating on the possible futures of bygone ages is both easier than predicting what's coming tomorrow, and more fun,' says David Barnett over at guardian.co.uk.

He goes on: 'It could be argued – and people have – that the 19th century was quite exciting enough without these speculative bolt-ons, but nevertheless, 20 years after The Difference Engine was published, it appears to be back with a vengeance. Two recent anthologies – Steampunk, edited by Jeff and Ann Vandermeer, and Extraordinary Engines, from Solaris Books – whetted genre fans' appetites, and steampunkish novels are following at a rapid rate: Stephen Hunt's series of books that began with the Court of the Air; Dan Simmons' literary fantasy Drood, in which Charles Dickens begins to suspect the hero of his unfinished novel is up to no good; and George Mann's Affinity Bridge novels all spring quickly to mind.'

What about Pax Britannia, eh? There are five PB books out already and another three due this year! And there are more planned! And it is steadily building up a loyal following... You get the idea.

If you would like to show your allegiance to Pax Britannia, then

send your name and address to www.paxbritannia@hotmail.co.uk and I'll send you some Pax Britannia badges and try to include your name in passing in a forthcoming Pax Britannia adventure. Now, you can't say fairer than that, can you?
Posted by Jonathan Green at 6:41 pm 1 comment: It's a wet Tuesday morning in West London and I'm feeling reckless, so here goes nothing...

As you may well already know, the next Pax Britannia Ulysses Quicksilver is entitled Dark Side in which our dandy detective-hero travels to the Moon. Now I already know what's going to happen - obviously - but here's your chance to possibly influence how the story progresses.

To put it simply, what would you like to see happen in a Pax Britannia steampunk adventure on the Moon? Now I'm not promising that any of your suggestions will make it into the finished book, and you may well come up with something I've already thought of myself, and anything that does make it in will obviously be copyright Abaddon Books/Rebellion Developments, so if you do suggest anything, you'll be giving up your moral rights to the ideas and all that...

So, if I haven't scared you off, drop me a line by replying to this blog and we'll see what happens. You might just find your idea making a cameo appearance...
Posted by Jonathan Green at 10:53 am 9 comments: