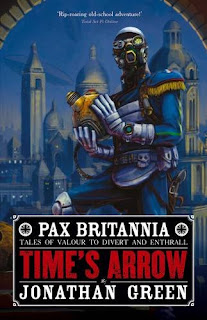 It doesn't start off in the most flattering manner (you can read the whole review here) but then the reviewer goes on to say:

I have to say the lad is back on form again, and I look forward to more of the same. The plot? well there's another super-villain or two, a super-heroine, more marvellous machines, monsters, death and destruction, and temporal confusion. In short, the mixture as before. Buy some!

You can buy your copy of Time's Arrow (if you haven't already done so) here.
Posted by Jonathan Green at 12:00 am No comments:

You can pledge your support for this project today by following this handy link.
Posted by Jonathan Green at 10:36 am No comments:

I popped along to the Second Surrey Steampunk Convivial, held at The Royal Oak in New Malden, today. As well as catching up with the likes of Mr Kit Cox and Herr Doktor, I got to meet Archimedes the Robot Parrot for the first time. 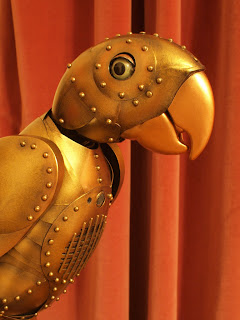 In case you're wondering (and you've read Pax Britannia: Time's Arrow already), yes, Archimedes is based upon Gustav Lumière's invention as he appears in the book. 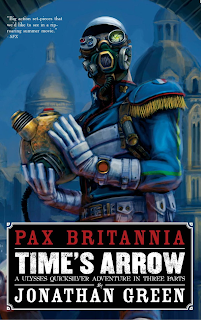 He bent down and retrieved something that had rolled under the desk.

It was the golden parrot. It was still attached to its perch but it was badly dented, having been partially crushed.

“Could this be repaired, do you think?” he asked. “I mean, I don’t know how much you know about electronics and audiology–”

“Enough,” she said, taking the broken object from him.

“What was it?” Ulysses asked. “His pet or something?”

Cadence shot him a scolding glance. “Archimedes is a state-of-the-art automaton.”

“Yes, what of it? Uncle Gustav liked the company.”

“Well, when you start naming the state-of-the-art automaton that you keep around your apartment for company, it’s what we call a pet.”


Archimedes has been fabricated by the talented Herr Doktor himself, and caused quite a stir at the Convivial.

If you're going to the Sci-Fi Weekender (1-3 March) then you too will be able to meet Archimedes, and pick up a copy of Time's Arrow while you're about it. :-) 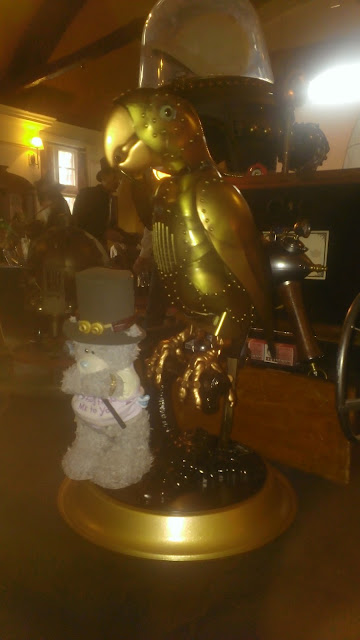 Posted by Jonathan Green at 10:33 pm No comments:

I was recently asked to give my opinion of what will be the Next Big Thing in SFF for the SF Signal Mind Meld. The piece is now online and you can read it here.

I'm one of several contributors and it probably won't surprise you that I predicted that Steampunk will be the Next Big Thing. However, what's interesting is how many of the other contributors also mention Steampunk...

Maybe I'm on to something after all... 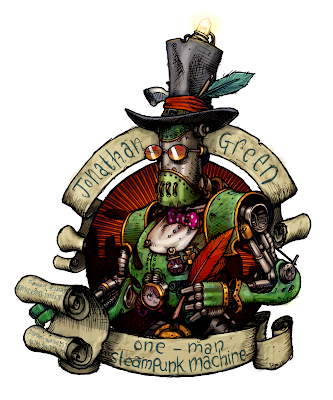 Thanks to Ben Henderson for this... 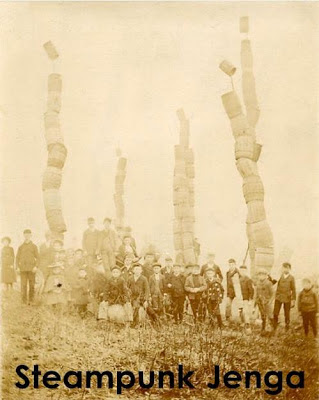 Posted by Jonathan Green at 11:51 am No comments:

As fans of all things steampunk, I thought you might like to see what artist Tom Brown and I have been working on since we met at last year's Weekend at the Asylum.

Check out the new blog, check out the Facebook page, click the 'Like' button, and start to spread the word. This is going to be something special... 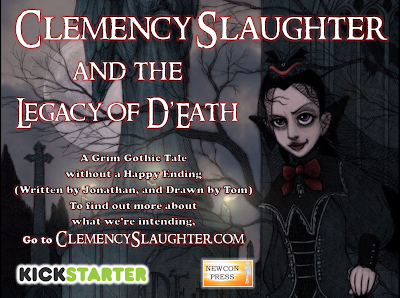 Posted by Jonathan Green at 3:52 pm No comments: