Or should that be Mary Nichols? The reason I ask is because today is the 123rd anniversary of the day the never-captured Victorian serial killer Jack the Ripper claimed his first victim.

In the early hours of the 31 August 1888, Mary Ann Nichols was found murdered in the dismal East End thoroughfare of Bucks Row, making her the first of the Whitechapel murder victims. Between then and early November of the same year, the killer who would become identified as Saucy Jack murdered and mutilated another four women.

Jack's enduring appeal is thanks largely to the fact that he was never caught, allowing for a whole host of possible explanations to be conjured up regarding who he was and why he murdered his victims the way he did. It's for this reason that he's so popular with speculative fiction writers. 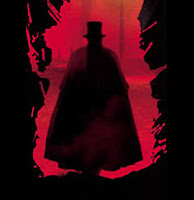 Jack has already made an appearance in the world of Pax Britannia - specifically the fifth Ulysses Quicksilver adventure Blood Royal - which allowed me to provide my only imagined solution to the mystery, and I am planning on having 'him' return in the future.

And the latest theory as to Jack's true identity? That he was none other than Inspector Frederick Abberline - the very man tasked with capturing the Ripper! It's certainly an intriguing idea, and one that would doubtless make a good subject for a novel...
Posted by Jonathan Green at 11:03 pm No comments: 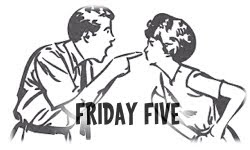 Jared and Anne, over at that sanctuary of all the treasures of geekdom that is Pornokitsch, kindly invited me to contribute to their Friday Five this week. The result is three lists of our five favourite awesome Victorians.

You can find the link to this week's Friday Five here. Having read the three lists you may also like to comment and add your own.

Maybe see you over there...
Posted by Jonathan Green at 12:04 am No comments:

The Summer of Steampunk!

Abaddon Books - publishers of the Pax Britannia series of steampunk novels created by Yours Truly - has announced the Summer of Steampunk and launched an official Facebook page for fans of the series. 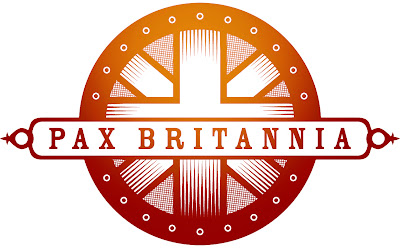 You can read more about Abaddon's plans for the next couple of weeks here, and check out the Facebook page here. And then there's news of an exciting new development in genre publishing to come...
Posted by Jonathan Green at 3:15 pm No comments:

JG at Weekend at the Asylum

Well, some might say it's about time, but I'm off to the Asylum in Lincoln on Saturday 10 September for the United Kingdom Steampunk Convivial.

Weekend at the Asylum is the largest steampunk festival in Europe, attracting more than 1,000 steampunks from across the World, and is taking place this year from 9-11 September 2011. 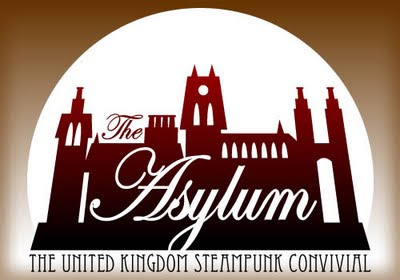 Special Guests will be Wilf Lunn, Robert Rankin and Fraser Hines, while I'll be there as a visiting author, along with Sam Stone, Toby Frost and Raven Dane.

I'll be in the Exhibition Hall on Saturday from 10.00 a.m. - 5.00 p.m. so why not pop along to get your Pax Britannia collection signed and pick up the latest titles from Abaddon Books while you're at it. I've even had some special badges made to commemorate the occasion! 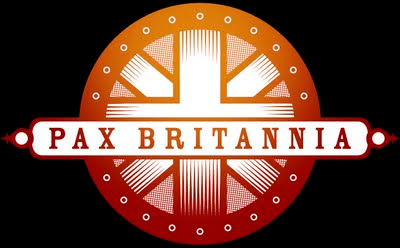 I'll also be giving a reading and talking about my work for an hour from 11.00 a.m.*

So hopefully I'll see some of you there. It should be most convivial.

* This is a provisional timing only and you should check again on the day, just in case.
Posted by Jonathan Green at 11:24 pm No comments:

I've posted steampunk versions of Batman and Iron Man on this blog before, but here's one of Cable from the X-Men universe. 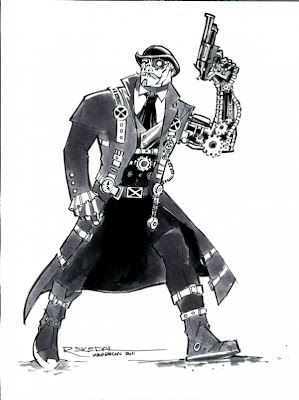 The image is by artist Rahsan Ekedal and is taken from the Project: Rooftop - Superheroes, Redesigned blog, which you can find here.
Posted by Jonathan Green at 11:05 pm No comments:

An evening with: BB Black Dog 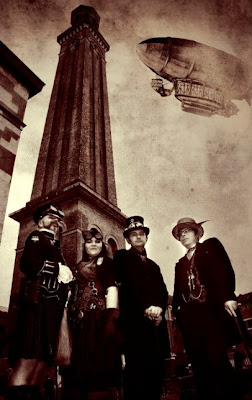 To celebrate the launch of their new album, BB Black Dog will be touring the UK later this year and Kew have managed to secure an intimate gig with them on Friday 18th November 2011.

Come along to Kew Bridge Steam Museum to experience this fabulous band in an unique venue. Doors open at 7.15 p.m. and there will be a bar and snacks available.

Tickets are available here.
Posted by Jonathan Green at 11:15 pm No comments:

Parsifal the Steampig is looking for a new home - all God knows how many tonnes of her!

If you have a garden/field/shopping mall big enough to accommodate her, then maybe she could be yours. 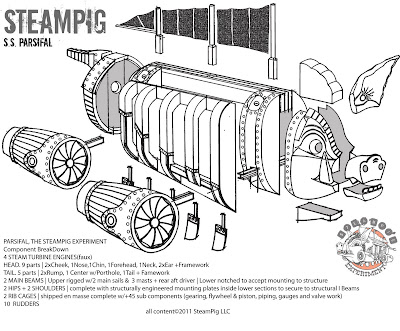 Posted by Jonathan Green at 10:22 pm No comments: 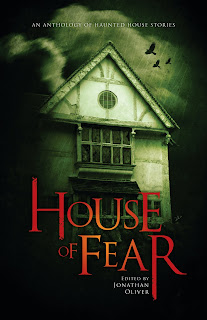 You know how I mentioned I've contributed a story to Solaris Books' House of Fear (edited by Jonathan Oliver and out this October)? Well the official Foyles launch has been announced.

It's taking place on 27th September 2011, 6:30pm - 7:30pm, at the Charing Cross Road store. You'll get a taste of the book's collection of new and original fiction and be able to join in the discussion of the ideas behind the writing of said stories with Sarah Pinborough, Christopher Priest, Paul Meloy and others.

Tickets are free but have to be booked via the Foyles website here.

Maybe I'll see you there...
Posted by Jonathan Green at 3:01 pm No comments: 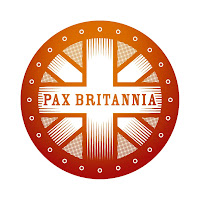 You may be interested to know that there is a forum associated with this blog and the world of Pax Britannia that you can access by following this link.

From there you will also be able to access forums where you can discuss my other works - everything from Doctor Who to Sonic the Hedgehog.

I also run the occasional forum-exclusive competition, so its worth joining up and dropping by every once in a while, just so you don't miss out on some exclusive prizes!

Hope to see you there some time...
Posted by Jonathan Green at 4:56 pm No comments:

I only discovered the other day that there is an actual recognised writing trope 'Everything's Better With Monkeys'. I didn't realise this when I wrote Evolution Expects (which is definitely enhanced by the appearance of the primates in the House of Monkeys) nor when I started plotting Time's Arrow (of which Part 1 is soooo nearly finished). But Time's Arrow is also improved by the addition of a primate - in this case a 800lb cybernetically-adapted silverback gorilla that goes by the name of Ishmael.

And you can meet Ishmael and his friends come October when Time's Arrow Part 1 is released in eBook form by Abaddon Books. Just don't call him a monkey, otherwise something like this is liable to happen... 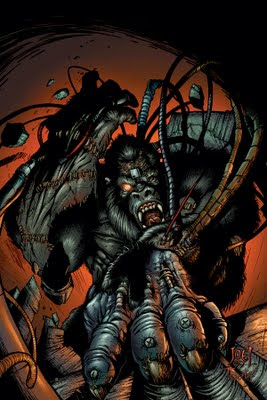 And because everything's better with monkeys, I no longer wish to be known as a freelance writer. From now on I'm going to introduce myself to people at parties as a certified penmonkey!
Posted by Jonathan Green at 10:51 am No comments:

As anyone who has read this blog for more that about five minutes will know, I have a bit of a thing for Lego. My passion for the little plastic brick has only been enhanced by the fact that my son is now old enough to enjoy proper Lego for himself.

I also have a bit of a thing for steampunk. (No! Really?) Carry out a quick search on this blog and you're find links to all manner of steampunk devices, vehicles and characters rendered in Lego.

And here's another one for the collection. 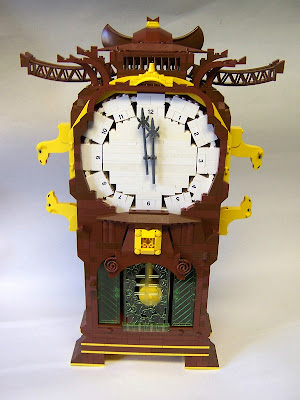 This time it's a Lego Steampunk Clock, created by Matt “monsterbrick” Armstrong. You can find out more about this incredible invention here.
Posted by Jonathan Green at 10:45 am No comments: 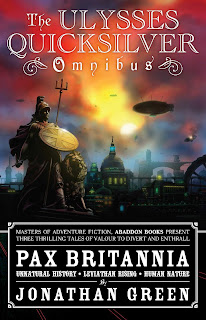 This one's from the Portland Book Review.
There is a lot of high-flying adventure backed by some solid plot and characters. The world itself is fully-developed, with a number of really nice touches, and technology is embraced here, unlike a lot of steampunk where the technology is the enemy at best. Fans of Doc Savage and Indiana Jones will love this book, and it’s a great read for everyone else.
To read the whole thing, follow this link.
If you've not picked up The Ulysses Quicksilver Omnibus for yourself yet, you can do so here.
Posted by Jonathan Green at 7:57 am No comments:

The World's Most Useless Machine!

I really should put something like this into one of my forthcoming Pax Britannia adventures.
To enjoy other equally barking-mad inventions, follow this link.
Posted by Jonathan Green at 9:45 pm No comments: