Technically, Steampunk is a sub-genre of science fiction, fantasy, alternate history, and speculative fiction that came into prominence during the 1980s and early 1990s. The term itself was first coined by K.W. Jeter (author of Infernal Devices) in a letter to Locus magazine that was printed in the April 1987 issue. Jeter wrote:


Enclosed is a copy of my 1979 novel Morlock Night; I'd appreciate your being so good as to route it Faren Miller, as it's a prime piece of evidence in the great debate as to who in "the Powers/Blaylock/Jeter fantasy triumvirate" was writing in the "gonzo-historical manner" first. Though of course, I did find her review in the March Locus to be quite flattering.


Personally, I think Victorian fantasies are going to be the next big thing, as long as we can come up with a fitting collective term for Powers, Blaylock and myself. Something based on the appropriate technology of the era; like "steampunks", perhaps... 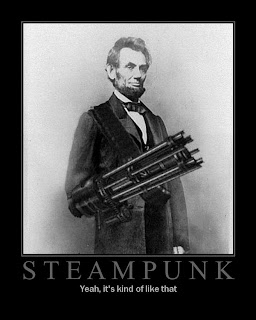 For many, Steampunk is a style; an aesthetic.

However, when it comes to literature, Steampunk involves a setting where steam-power is still widely used — usually Victorian era Britain (or something very much like it) — that incorporates elements of either science fiction or fantasy, or both.

Works of Steampunk often feature anachronistic technology or futuristic innovations as Victorians may have envisioned them. This technology may include such fictional machines as those found in the works of H. G. Wells and Jules Verne - analytical engines, clockwork robots, gravity-repelling spaceships, and the like.

Personally I like the term retro-futurism, which is summed up quite neatly by the phrase, "What is old is new again."

As to how Pax Britannia differs from other steampunk worlds, click here.