You were expecting someone else?

Pax Britannia: Evolution Expects is out now and available from all better bookshops. I was very pleased to find a full page advert in both 2000AD and the Judge Dredd Megazine this week which I have reproduced here (in case you missed it). 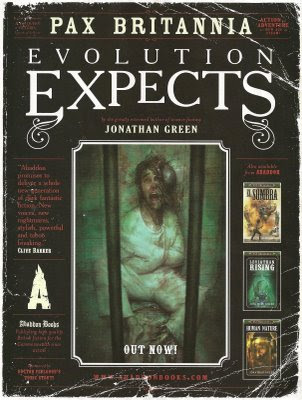 And the reviews are already starting to come in too. You can read what Graeme Flory of Graeme's Fantasy Book Review has to say about it here. And you can pick up your own copy here.

Happy reading...
Posted by Jonathan Green at 11:36 pm No comments:

If you drop by this blog over the next couple of weeks and think it's been a while since it's been updated, have no fear, I haven't given up blogging. It's just that I'm off on holiday for a couple of weeks and won't have access to the Internet. So play nice while I'm away and remember, if you break anything you pay for it. ;-)
Posted by Jonathan Green at 10:10 am No comments:

We're over half way through 2009 now (where did the time go?) so I thought it an appropriate moment to give you an update on what you can see in print from me between now and Christmas.

First up there's Evolution Expects, my fourth Pax Britannia novel featuring dandy adventurer and agent of the crown, Ulysses Quicksilver. More steampunk action than you can shake a sword-cane at. 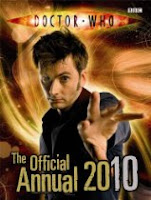 Then, in August, there's the timely release of The Official Doctor Who Annual 2010. I've contributed about a third of this and I'm excited to see how many puzzles and factual write-ups have turned out.

Demons: A Clash of Steel Anthology - this should also be out in August and features an original short story by myself entitled The Pact.

Stormslayer, my sixth Fighting Fantasy adventure gamebook, hits the shelves in September and it would be an understatement to say that I'm looking forward to how this one is received by the established fans and new readers alike.

The American edition of last year's Christmas offering What is Myrrh Anyway? is out around October/November time. It's being published by Skyhorse Publishing and it's called Christmas Miscellany: Everything You Always Wanted to Know About Christmas. I've set up a new blog to accompany its release which you can access here.

And then, just in time for Christmas (if I pull my finger out) is Blood Royal, the fifth UQ PB adventure and the start of a new four-book story arc. You're not going to want to miss this one.

And then in the new year... well, let's just say, there's plenty more where that came from...
Posted by Jonathan Green at 11:40 pm 1 comment: